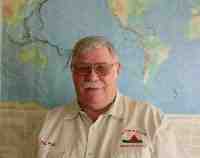 Dr. Robert "R.B." Trombley, Ph.D., is the founder and Director & Principal Research Volcanologist of INTLVRC (formerly SWVRC) and is a registered volcanologist with the International Association of Volcanology & Chemistry of the Earth's Interior (IAVCEI). He is an award winning scientist, including the coveted Bausch & Lomb Honourary Science Medal, and has traveled and is well known all over the world for his work on volcanoes. Dr. Trombley is also affiliated with many other volcanological associations. In May, 2004, Dr. Trombley was selected as one of ten internationally recognized content experts for the ""Inter-Island Distant Learning Exchange Project". Lately, he has become involved with the "21st Century Learning Productions", producing and starring in docmentary type episodes involving volcanoes and geology in general. He is the principal designer of the highly successful software programme "ERUPTION" Pro 10.7 which provides long-range forecasts of volcanic eruptions all over the world. "R. B." has written, and had accepted, a paper for the American Geophysical Union (AGU), as well as several other papers. He has authored three books on volcanoes, "Island Born of Fire: Piton de la Fournaise" released in 1996 and re-released in November, 2006, "The Forecasting of Volcanic Eruptions" released in September, 2006. His latest book (which he co-authored) is "Scienceworks - Be A Volcanologist" which was released in January, 2008. He has also written, over the years, several articles involving volcanology for various volcano related publications. Dr. Trombley has also served as one of the Technical Advisors to the National Geographic Society on a TV documentary about volcanoes. He has been elected to "Who's Who" twice in his career. Dr. Trombley is a Professor Emeritus at the Phoenix, Arizona campus of the DeVRY University. Dr. Trombley received his BSEE from the Lawrence Technological University (formerly Lawrence Institute of Technology), his Law degree from LaSalle University and his Ph.D. from the University of Dallas and completed post-doctorate work at UCLA and the University of New Mexico in geology & physics. He founded INTLVRC in 1980, has two grown children and resides in Apache Junction, Arizona.